BANASA supports the accreditation of 12 communities as members of COLRED 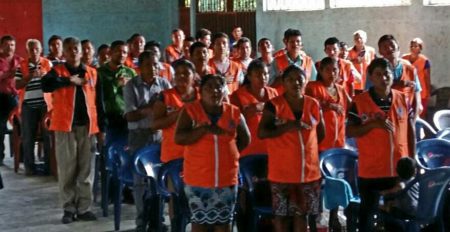 Since, January of this year, CONRED and the Southwestern Trifinio Integral Development Association- ASODITSO-, with BANASA and AGROACEITE’s support have been training new COLRED’s members on the following issues: disaster risk reduction management; functioning and methodology for local coordinators; risk diagnosis, types of shelters and how to organize them; climate change, their causes and adaptation, COLRED commissions (evacuation, rescue, shelters, safety and coordination) and local response plans.

The aim of COLRED is to give support to the communities during natural disasters and organize them to learn to react in the correct right way to an event, and if necessary, provide the first response, in coordination with municipal or departmental authorities.

“We thank CONRED for transferring knowledge for COLRED’s formation, because we are an area vulnerable to flooding and we should be prepared for winter,” said ASODITSO president, Felino Sandoval. “We also appreciate BANASA and Agroaceite’s support for coordinating and managing the entire accreditation process and congratulate the municipalities of La Blanca, Coatepeque and Retalhuleu for their support in organizing the accreditation’s event.”