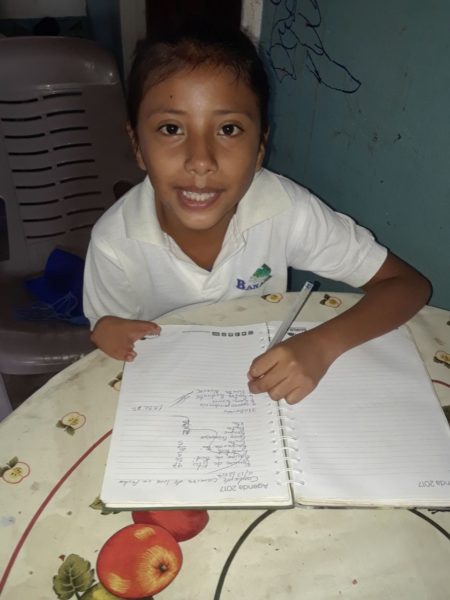 Helping young girls like Esther is an integral part of the Mojarras School methodology of the BANASA company. Genesis Esther is an elementary school girl who has been bullied about her disability – the fingers on one hand did not develop normally.

Because of this disability Esther didn’t want to go to school. She always covered her had with a washcloth, tried not to be noticed and would not participate or raise her hand to answer a question. She was afraid the children and the teachers would make comments about her hand and her parents were also concerned that she would be the target of bullying and discrimination at school.

Esther’s mother spoke to the Director of the Mojarras School and Esther’s teacher. “We both told her that there was nothing to fear and that we were going to change the way she felt about her hand,” said Natalie the Mojarras School Director. “We talked to the children and explained her disability and asked them not to discriminate or bully her because of her hand. They responded very positively, they are bright kids and they understood the problem.”

The teachers spent a lot of time counseling Esther and reinforcing her self-esteem. “She was a very shy girl, very secluded in the classroom,” said Natalie. “But over the course of the last year she began to unwind and one day she raised her hand to participate. What a lovely surprise that was for all of us.” Soon after that she was the first to say that she wanted to participate in a dance. Esther danced without covering her hand and the parents all enjoyed seeing her participate.

“Helping young girls like Esther brings us great satisfaction,” said Bernhard Roehrs, BANASA Corporate Director, “We’re delighted to be able to support and help young girls to overcome any issues that might create shyness or shame. Through the methodology used at the Mojarras School we promote values and develop self-esteem so that they become children without prejudice and they can attend school without any fear of bullying or discrimination.”

Esther’s mother said that she had wanted to take her daughter to another country to operate on the hand. The school director advised her to first talk to Esther and find out how she felt about that. Esther’s reaction was a concern about missing school and she said she did not want her hand operated on, as everyone accepted her as she was and no one bullied or teased her anymore. She has a positive outlook now and feels she is a special girl. “This is the way God made me and this is how I want to be,” said Esther.

Helping young girls who face cultural and physical difficulties is just one aspect of the education our employee’s children receive at the Mojarras School.