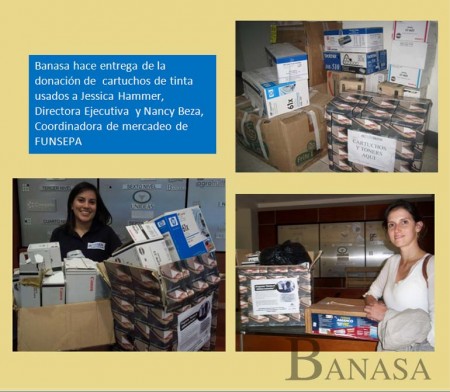 Guatemala, January 2012. Throughout 2011 Banasa collected used ink cartridges from all its farms and administrative offices, and donated them to the “Hasta el último cartucho”” (Until the last cartridge) project of the Sergio Paiz Andrade Foundation (FUNSEPA), to be recycled and sold to raise funds to buy equipment for public schools.
With this initiative Banasa is contributing to the conservation of the environment -by recycling the cartridges- and supporting the country’s education at the same time.
Nancy Beza, FUNSEPA’s Marketing and Fund Raising Coordinator said that with the money raised from selling the cartridges several public elementary schools were fitted with computers. “We have helped more than 300,000 children in 769 schools in several regions of Guatemala. We know that technology is the bridge to progress, and thanks to companies such as Banasa, which donated these cartridges, we are reaching more kids”, commented Beza.
Conscious of the importance of recycling and helping education as well, all Banasa employees contributed to this initiative by donating their used ink cartridges. With this assistance Banasa demonstrates it is a socially responsible company which contributes to Guatemala’s social and economic development, using technology as a tool to further education.