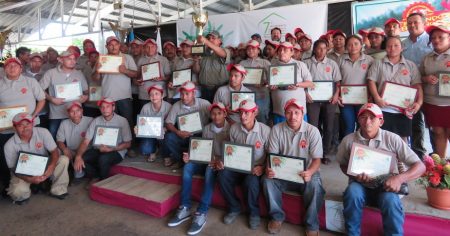 With the aim of recognizing the work made by the workers of BANASA on the past year, the company held the seventh delivery of the prize to the productivity, which recognizes good performance of employees who reached their goals last year. The award recognized 320 field and packing plants workers, who were creditors of a cash bonus.

The award to the productivity emerged in 2010 in the date of the anniversary of the death of the founder of BANASA, Fernando Bolaños, highlighting the values bequeathed by his example of life which have become the Corporation values: perseverance, hard work, teamwork, honesty, responsibility and generosity.

Authorities of the company and representatives of some municipalities and community development councils – COCODES – attended the event. BANASA is one of the few companies in Guatemala that has international certifications, “we are a company who projects itself internationally and has certifications in the social, environmental, community, industrial and occupational safety areas,” Roehrs said.

Gustavo Bolaños, President of Agro-plantations, thanked all contributors that with their daily work make of BANASA one of the best banana companies of the region: “we are committed to improve the lives of our workers and their families and to provide worthy employment to guatemalans”.