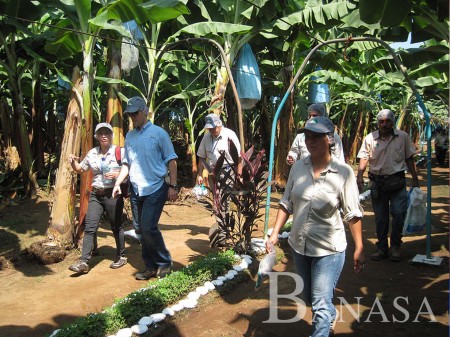 Ocós, San Marcos, Guatemala, June 2012. The most recent health survey of the “trifinio” area of southwestern Guatemala conducted by the University of Colorado, Health Needs and Human Development in Guatemala’s Southwestern “trifinio” (Berman and Asturias, September 2011) revealed that mothers are suffering from food insecurity, which is manifested in their children’s health.

Last week directors from the United Nations System in Guatemala visited the company’s operations to observe first-hand the programs that Banasa is implementing to combat this problem, and to join forces to help achieve the Millennium Development Goals, especially to reduce infant mortality and improve maternal health in the area.

“This is a first step in this alliance between the private sector and the United Nations, which we believe has ample potential for growth,” said Ernesto Sinápoli, Representative of the UN Food and Agriculture Organization (FAO) in Guatemala. “The effort and interest of the private sector to reduce the high malnutrition rates in the poorest communities is important,” said Héctor Morales, Communications Analyst at the UN Office of the Resident Coordinator.
“We are convinced that our commitment goes beyond what international conventions dictate, stated Bernardo Roehrs, Banasa’s Corporate Director. “We believe our alliance with the United Nations system, with good public policies, can change for the better the situation of families in the region,”

During the visit the group participated in a training session of Banasa’s Happy Families program which targets mothers, as well as in a meeting with ASODITSO, an organization which represents 15 communities living in the area, where not only were the area’s main needs discussed, but also several corporate social responsibility programs that Banasa has launched to support local communities, in the areas of health, education and disaster preparedness.

“I am very thankful with Banasa because they brought development to the community,” said Magaly Fuentes, a community leader, participant of the Happy Families program.

The point where the three southwestern provinces of San Marcos, Retalhuleu and Quetzaltenango converge (the “”trifinio””) is an area which somehow has been neglected by government authorities, lacking in basic services including education. Thus the population living in the area has been greatly affected by malnutrition, where there is 42% prevalence of diarrhea and 58% of children suffer from respiratory diseases.

Banasa employs more than 3,500 direct employees and more than 10,000 indirect ones, through more than 100 suppliers of their value-chain production, offering year-round employment to small and medium suppliers._x000D_

The Happy Families program, with 4,000 direct beneficiaries, is only one of the initiatives we have throughout our areas of operation which contribute to the reduction of malnutrition, poverty and lack of education. The program has more than 400 mothers more than 500 participating children in the beneficiary communities.

Banasa has become the first company nationwide to pay the -vital minimum wage- (living wage), thus improving the welfare of their employees and families. They also boast a private school where the children of their employees receive a quality education, giving them the opportunity to work with the company later on.

“We have good environmental practices, with international standards throughout the supply chain. All of our banana farms are certified by Global Gap and the Rainforest Alliance. We have the first banana plant in the region to be certified with the Business Alliance for Secure Commerce”, said Roehrs during the visit to the plantations.

We are building a Human Development Center which soon will offer holistic development opportunities to needy individuals, families and communities living in the -trifino- area, with health, education and recreation services offered to the entire -trifinio- region inhabitants. The -trifino- region needs the attention of government authorities so that the more than 23,000 people living in more than 20 communities in the area can benefit from development projects. The region has an illiteracy rate of 26%, only 27% of the people living there have ready access to drinking water, and only 1% have adequate drainage, concluded Roehrs.

As a result of this visit, community leaders of Ocó’s, San Marcos, will meet in July with the FAO Representative in Guatemala to discuss possible development projects in the area, to be presented to local government to improve the region’s Human Development Index.