Doctors from the Human Development Center of Banasa train midwives. 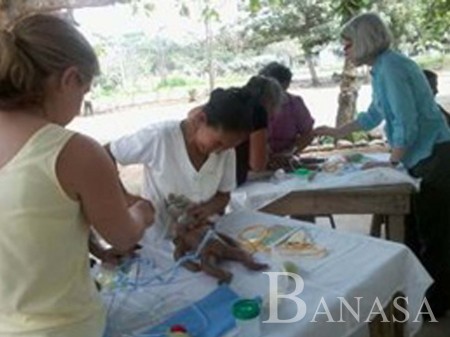 Aldea Los Encuentros. A total of nine midwives Agroamérica neighboring communities were trained by physicians Anschutz Medical Campus, University of Colorado, USA. Six of them are already certified by the Ministry of Health, while the remaining three are in the certification process.

According to Hilda Alvarado, a social worker of the Center for Human Development Agroamérica, midwives “were trained in the process of attending a birth, address the possible existence of dystrophy shoulders and techniques to detect if the baby is in a breech position.”

The training included learning techniques to manage normal deliveries and what to do in case of bleeding.

To Ernestina Vasquez, 62, who has 30 years of practice as a midwife, this training is important because it provides techniques to ensure the welfare of the women who give birth and babies communities. “God willing we will keep getting lessons from doctors, because the knowledge we acquire is of great benefit to the people,” he said proudly Dona Ernestina.

“What I like about learning to be a midwife is to help people, because some people do not have the benefit of being able to attend the hospital or can not afford, or are single mothers. So I decided to become a midwife, “said Karina Vasquez, 17, who aspires to become certified comadorna.

These trainings are part of the commitment to the Human Development Center has taken pear Agroamérica contribute to improving the living conditions of the people living in the communities around the banana company.