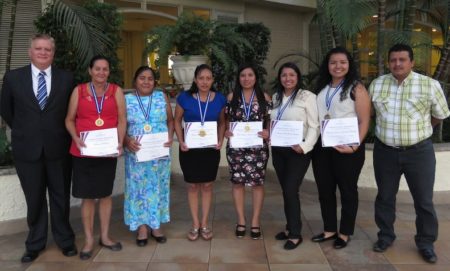 Vilma Chiroy and Elda Moreno work for BANASA’s operations in the Southwest of Guatemala; Irma Romero and Marcos Orellana work in Escuintla and Nancy Pineda and Brenda Quebedo, at the main office in Guatemala City.

The First Lady, Patricia de Morales, the Vice President, Jafeth Cabrera and the Minister of Labor and Social Welfare, Aura Leticia Teleguario, participated in the ceremony. They presented recognition medals to BANASA’S workers and to a total of 33 women from different disciplines in the private and public sectors.

President Morales congratulated and thanked the women who were honored as he underscored the need to promote changes to ensure better access to health, education, employment, security, housing and social welfare for women, without exclusion or discrimination.

The Labor Excellence Award was established through Ministerial Resolution 124-2004 and companies from the agricultural, commercial, industrial, service, and agro-industrial sectors, as well as government agencies, submit their nominations.

Irma Romero the worker who was honored for her seniority at BANASA stated: “I started to work in various capacities at Finca La Sierra eighteen years ago. Then I learned to select product and have been engaged in that task since then. I am motivated to come to work every day as this is my livelihood, which provides for a good quality of life with my family. Thanks to God and the company, my children were able to go to school and they were also given the opportunity to work for the Company”. Irma is 55 years old and thinks of herself as a “fighter”.

Our workers are at the core of our operations at BANASA; we mind their wellbeing and development and, beyond paying them a decent salary, we try to help them to grow personally and professionally. To accomplish this, we implement social programs for our workers and their families. “WE CONGRATULATE OUR WORKERS WHO RECEIVED THE LABOR EXCELLENCE AWARD, A WELL DESERVED RECOGNITION,” stated Bernhard Roehrs, Corporate Director of BANASA.