“ONE BANANA A DAY” HAS CHANGED THE LIVES OF MORE THAN 1,000 CHILDREN IN RURAL GUATEMALA 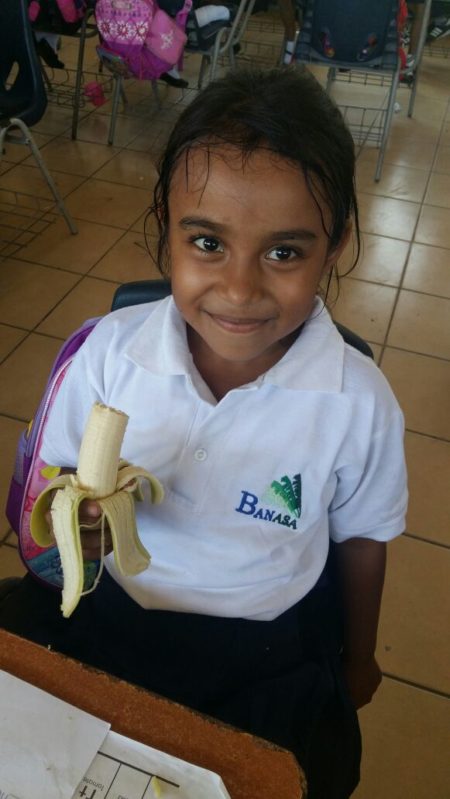 1,278 children from six rural schools benefited from the BANASA food security program “One Banana a Day Changes Your Life.” Schools are located near BANASA operations, in the Departments of Quetzaltenango, Retalhuleu and San Marcos.

This program aligns with the United Nations Sustainable Development Goals #2 – End Hunger and Achieve Food Security. It consists of the donation of bananas by BANASA to rural schools close to the operations of the company. BANASA donated 225,700 bananas this year.

The bananas provide a vital supplement to the students’ daily nutritional needs. Bananas have a high energy value (1.1-2.7 kcal / 100 g) and are an important source of both B and C vitamins. They contain numerous mineral salts, including iron, phosphorus, potassium and calcium as well as three natural sugars: sucaro, fructose and glucose, combined with fiber.
According to USAID statistics, Guatemala has the highest prevalence of stunting (49.8 percent) in the region of the Americas and the sixth highest in the world. Half of all children under five are chronically malnourished, the worst level of malnutrition in the Western Hemisphere.

This lack of food security results in more than 45 Guatemalan children dying each day from causes related to malnutrition. Of the children who survive, 49.8% suffer from chronic malnutrition (SESAN). Chronic malnutrition (measured by height in relation to age) also causes less retention of information learned in school and lower productivity. In addition, it can also make the child more susceptible to diseases and cause a loss of IQ – effects which are not reversible.

Just one banana a day changes this scenario. A banana provides an instant, sustained and substantial boost of energy and can help overcome and prevent diseases such as anemia, blood pressure, overweight, ulcers or stress. Not only does this program contribute to the nutrition and health of the students, it also improves their school performance. It is a proven fact that healthy eating affects academic performance.

The program, which is a joint effort of the Community Development Councils -COCODE, schools, parents and BANASA, also offers a preventive health component that involves the mothers of the students at these rural schools. At some schools, government agencies train teachers and mothers in nutrition, health and food safety issues.

When it began in 2012, this program was a partnership between BANASA and SESAN, the Nutritional Food Security Secretariat of Guatemala, to combat acute malnutrition among rural children. Participating teachers report, and test findings reveal, that the school performance of participating students has improved remarkably. At the program’s closing sessions for 2017 the efforts and organization of the school directors, parents and COCODE members in these communities were recognized.

This BANASA CSR initiative was recognized with a ‘Big Tick’ as part of the prestigious Responsible Business Awards 2014 run by the charity, Business in the Community. The ‘Big Tick’ is the first level of accolade in these awards, the UK’s longest-running and most respected awards program recognizing businesses that are making a positive difference to society and to the environment.